The Guyana Rice Development Board (GRDB) today announced that research is pointing to a possible release of a new variety of rice by 2018. This announcement was made during the annual Farmers’ Field Day which was held at the Burma Rice Research Station, Burma, East Coast Demerara. 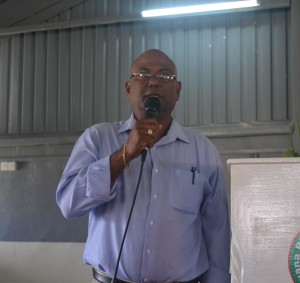 Extension Manager, Mr. Kuldip Ragnauth, while offering opening remarks, indicated that the event is a means of interacting with farmers and listening to their needs while offering best practice advice.

“Today’s event is intended to highlight the work being done at the research station and also to gather feedback from farmers on what they would have observed in order to determine what can be done to further benefit farmers as a whole.” Mr. Ragnauth said.

The day’s proceedings included an interactive session where farmers from Regions Two, Three, Four and Five were able to ask questions about pest management, methods of improving yields and packaging.

One farmer indicated that seed paddy bags should be labelled with the class of seed paddy being purchased. 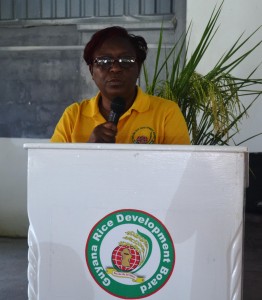 Quality Control Manager, Ms. Allison Peters indicated that this issue is being addressed at the Board level and that tenders have been issued for suppliers of labelled packaging material.

“That is a very good observation. The issue of having properly labelled bags for seed paddy has been high on the agenda as complaints about not being able to identify the seed class has been raised. If you would have read the newspaper, you would have noticed a tender was issued to supply such material so from this crop we are aiming to have the seed paddy in bags that are labelled.” Ms. Peters said.

As consumer needs and preferences continue to change, the need for new varieties of rice has been a constant request from farmers. Currently, the station is conducting research on 5500 lines of paddy. Research Officers are constantly making strides to develop new varieties which have higher yields and stronger resistance to pest and diseases. 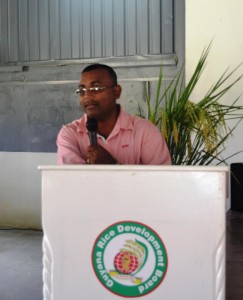 “From where I stand and being aware of what I have, it is looking very likely that 2018 you can see that (a new variety). However, a precise deadline for releasing a variety; it is very difficult in a sense that if I tell you first crop 2018, I still have two crops for testing to do and anything can happen within those two crops and it is a decision that has to be made at the end between the researchers and the stakeholders on when the variety should be released.” Dr. Persaud said.

Many farmers indicated that they were anxiously awaiting a new variety adding that they are positive that this new variety will possess higher yields and stronger pest and disease resistance properties.

“The fact that farmers are asking for something new shows the progressive thinking of farmers. It shows that with the variety you want something new and with the process you want something new. Additionally, with the positive feedback we are receiving from farmers who are practicing the 6points methods has pushed us to consider adding additional points in the near future. We are working to introduce a 7points or even an 8points system.” Mr. Ragnauth added.

The field tour involved interactive discussions with farmers, which afforded them to opportunity to have a glimpse of the plots used experimental purposes. The purpose of the experimental plots are to test new fertilizers, plant varieties and chemicals to treat pests and diseases. Based on findings, research officers would then be able to advise farmers on the best fertilizers for improving yields, and pesticides for treating paddy bug, red rice, etc. Farmers visited one plot that is currently undergoing treatment for paddy bug with new chemicals. This process is done by encouraging paddy bugs to infest the plot. The researchers would then apply to the chemical to the plot at intervals. This is done for two crops. 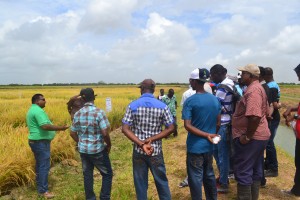 Annand Ramdowar, a rice farmer from Cane Grove described the field tour as a “good process” and also indicated that being able to see the plots being treated was helpful. He also commended the research station on the quality of seed paddy in the plot nursery, adding that it was the first time he has come to the come to the Field Day and seen such good lines of seed paddy.

Research Assistant, Leland Sonny explained that this process would help the officers to advise farmers on the best chemicals to use to treat paddy bugs and the percentage of damage done to the crop.

“At the end of the trail, we would take a sample of paddy and test it. This line of testing would be able to tell us what percentage of paddy was damaged and to what extent.” Mr. Sonny said. 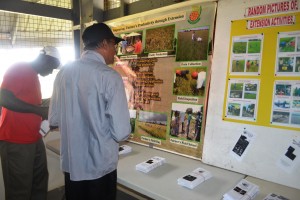 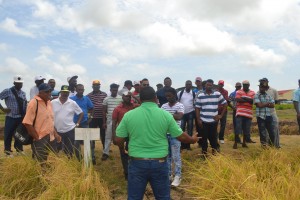 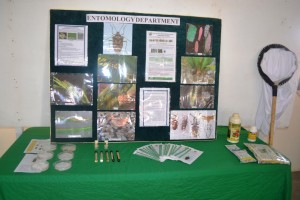 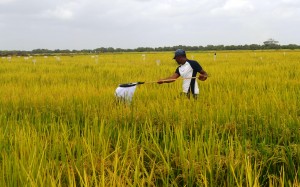