The Ambassador of the Argentine Republic, H.E. Luis Martino today paid a courtesy call to the Minister of Agriculture, Noel Holder at his Regent Street Office. The ambassador was accompanied by Argentine’s candidate for the position of Director General of the Inter-American Institute for Cooperation on Agriculture (IICA), Mr. Manuel Otero. M.Sc. and IICA’s Representative in Guyana, Mr. Wilmot Garnett.

During the meeting, Mr. Otero, who prior to joining IICA in 1988 worked in Washington as an Agricultural Ministerial Advisor, indicated that he is honoured by the process thus.

“I have been honoured by the Government of my country with support for my candidacy for the General Directorate of IICA for the period of 2018 to 2022. With 75 years of experience, IICA must reinforce its validity and commitment to continue working with its member countries in promoting an increasingly competitive, sustainable and equitable agriculture, in order to consolidate it as a true engine of development of the American continent and the Caribbean countries.” Mr. Otero said

Mr. Otero served as the Chief Advisor to the Director General of IICA and also assisted in the implementation of the Action Plan for the Modernization of Latin America and the Caribbean from 1989 to 1991. He was subsequently appointed head of the Programming and Evaluation Division.

Additionally, Mr. Otero was entrusted with the responsibility of exercising the General Coordination of the IX Inter-American Conference of Ministers of Agriculture of the Americas. While in those countries he worked as Director of the Andean Regional Centre from 1997 to 2000 and headed IICA’s Representative Body in Uruguay from 2002 to 2011 and Brazil from 2011 to 2015.

Mr. Otero was also appointed Vice President of the National Institute of Agricultural Technology (INTA) where he served from 1999 to 2001 where he promoted the importance of technological innovation, through joint actions with MERCOSUR member countries Chile and Bolivia. 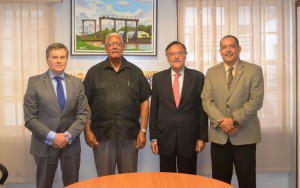