An all-female farmers’ group in Woodley Park, Region Five, consisting of approximately 30 women earn their livelihood through planting celery and eshallot (shallot), and marketing them from their yards.

The women’s group afforded staff of the Government Information Agency (GINA) the opportunity to look at farming areas and get an insight as to how these practices benefit their livelihoods.

Planting celery and shallot in Guyana, more specifically along the coast is probably one of the most cost effective and efficient crops grown. Sale of the products are guaranteed since they are and important ingredients in many local dishes.

One of the members of the group, Ms. Jaipersaud (only name given) said that she has been farming the crops for 27 years however; she has experienced continuous challenges mainly attributed to severe weather conditions.

“The heavy rainfall does wash off the soil from the root and you know they (the crop) fall off,” Ms. Jaipersaud lamented.

Ms. Jaipersaud’s complaint was just one of many of the female farmers who were involved in this type of cash crop farming for a number of years. 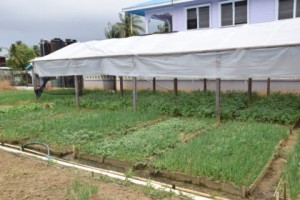 In 2016, the National Agricultural Research and Extension Institute (NAREI), in collaboration with Food for the Poor Guyana Incorporated, constructed a number of shade houses in several villages within Region Five.

The women of Woodley Park were the beneficiaries of 16 shade houses. They also received a five-foot-high wooden trestle, a 450-gallon water tank, together with a 100-foot-long garden hose as part of the package for the shade houses, which were to be located mainly in their backyards.

The shade houses now protect the crops from natural disasters and weather conditions. The women said that these contributions have allowed them to have a greater level and quantity of harvesting, therefore returning more income.

What makes it easier; the market comes directly to the residence of the women since the supply for the demand for the cash crop emanates from within the village. Within the Woodley Park area, celery and shallot are the main cash crops grown and provide a sustainable livelihood for residents.

The Woodley Park farmers’ group conducts business with vendors of Regions Four and Five who take their produce to Stabroek, Bourda, Mahaica and other markets within these regions.