Inclusive governance is a prerequisite to development and with this in mind the Ministry of Agriculture has initiated a number of policy initiatives which fosters such development within the industry.  As part of the wider plan, Agriculture Minister, Noel Holder, on Friday last held dialogue with Region Two rice farmers on the way forward for the industry.

The Minister was at the time leading a two-day outreach exercise in the Region specifically to address some of the pressing agricultural issues which may exist. First of the Agenda was a rice farmers meeting which attracted scores of rice farmers who were eager to raised issued which they thought were affecting the industry. 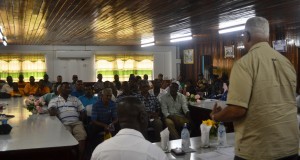 Among the concerns raised were the implementation of vat on agricultural equipment, the need for more markets to be secured, changes to the Factory Act, Gov’t intervention to ensure payments are received from millers, grading of rice among others.

With respect to changes to the factory act,  Mr.  Nath Ram  –   a prominent rice farmer made calls this to be fast-tracked alluding to the fact that the present act in his view safeguards the millers as opposed the rice farmers.

The Agriculture Minister In addressing the issue noted the concerns of the farmers, pointing out that had the concern been raised prior, the process could have already been started, as it is something which was done successfully in the past.

He pledged Government assistance in ensuring that the issue is ironed out and in a timely manner. The work of the Ministry, especially its extension and drainage arm came in for high praise, as the farmers noted that they have been getting the much-needed support from the extension officers and engineers.

However,  reservations were made with respect to the cleaning of the Cozier canal. According to Mr. Deoram Mohammed, the engineer’s carried out the work in a manner which would only make the drainage issue worst, as they were cleaning the canal from the back to the front of Cozier.

Mr. Fredrick Flatts, Chief Executive Officer of the National Drainage and Irrigation Authority  (NDIA), in giving clarity, pointed out that in irrigation work, it is done from the front working its way to the back; however, when it comes to drainage works, the right way is clearing from back, working their way to the front.

The clarity was well received by farmers as the CEO encouraged the residents to continue to be vigilant by monitoring works carried out, as they are the immediate beneficiaries and substandard work, will only hamper they livelihood.

The issue of payment by Millers has been a cause for concern, and Government has issued a strong call to Millers to get their act together, as they actions have been affecting the industry.  According to Farmer George, Millers in Region Two have been making it a habit of not paying farmers and called on the Guyana Rice Development Board to act.

General Manager (ag), Mr. Khuldip Ragnauth and Quality Control Manager of the Guyana Rice Development Board (GRDB), Ms. Allison Peters respectively spoke on behalf of the Rice Board. According to the Representatives, the mandate of the Board is to regulate across the board the functions of the industry, as opposed to representing farmers on non-payment issues.

The Act states clearly that the Rice Producers Association (RPA) is the entity with the power and responsible for representing farmers rights, and should be the entity ‘policing’ the system to ensure Millers are compliant.  The Ministry of Agriculture has issued a call for the RPA to do their part by assisting rice farmers in this regard.

In addition, Agriculture Minister, Noel Holder, has committed to initiating a PR campaign which will put pressure on millers to ensure they keep their end of the bargain.

Regional Chairman, Mr. Devanand Ramdatt welcomed the move by the Ministry of Agriculture in working together by looks at ways in which support can be given to farmers, alluding to the fact that a coordinated approach by all players within the industry is the way to go.

On the way forward

The Agriculture Minister spoke of efforts by Government to ensure that farmers can access loan. He added that the Bankers Association is presently addressing the issue and will officially address farmers in the near future.

“We are concern about your livelihood and we want to see how we can bring the much-needed support needed to ensure the industry prevails….” the Minister said.

Another area of consideration is the need for government to get involved in milling. This according to the Agriculture Minister will level the playing field within the industry.

“It is something we are seriously considering at the moment. It is something which was done in the past and had been successful and it is something I know will be beneficial…We did it when the price for fertilizer had skyrocketed and immediately forced the reduction in price from 10,000 to 4000 per bag of fertilizer,” the Minister stated. 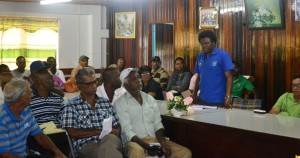 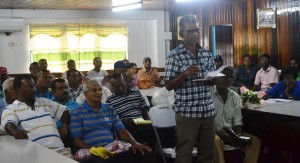 Deoram Mohammad, a rice farmer, making a pount during the meeting 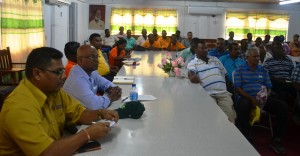