A two-Member delegation representing the Private Sector Commission today held dialogue with the Minister of Agriculture, Noel Holder and GuySuCo’s Chief Executive Officer, Errol Hanoman on the future of the Sugar Industry.

During the meeting, a summary document on the sugar industry prepared by the PSC Agricultural Committee was handed over to the Agriculture Minister.

The brief, which was presented by PSC Members, Vickram Oditt and Annette Arjune, looked at ways in which GuySuCo can improve yields, the diversification of the industry, proper husbandry, field operations, and the Corporation’s indebtedness.

“GuySuCo’s poor performance has been due to poor sugar cane yields…the result is reduced production and productivity, increased cost and annual losses which keep increasing- a no win situation,” Oditt stated.

The future of the sugar industry is premised on the viability of estates producing sugar at optimal capacity. The Corporation for some time now has not been a star performer and according to the Corporation’s Chief Executive Officer, unless there is significant investment plugged into GuySuCo the industry will not survive.

“The sad reality is that from January 2000 to September 2016, GuySuCo lost over 1,000,000 man days as a result of industrial action which is worrying,” Hanoman said.

Recently, workers of the Albion Estate have been taking a stand against such losses and have not been supportive of the Unions organized strikes. During yesterday’s strike, GuySuCo recorded a 59 percent work attendance at the said Estate, compared to the normal 60 percent turnout.

“It is clear the workers have spoken. They are concerned about their livelihood and they are taking a stand against the Union forcing them to strike against the Government…The stakeholders need to confront the hard realities of sugar. It is a fact that the corporation is highly indebted and requires huge injections of capital to survive annually,” the CEO posited.

The CEO is of the view that had the industry not been politicized, it could have been in a better position to survive.

“The EU’s quota management for sugar will end on September 30, 2017 and a fall in prices towards the global sugar price and decrease in sugar imports from traditional ACP suppliers are anticipated,” Hanoman said.

The end of the quota management is the final step in the reform process of the EU market which began in 2006 and which has been the subject of Accompanying Measure Support for the ACP Caribbean industry over the intervening period.

Meanwhile, Agriculture Minister, Noel Holder agreed that for the Corporation to survive and prosper, GuySuCo needs to be re-organized into a diversified industry.

Government has since taken a consultative approach to the future of GuySuCo and had requested the Opposition People’s Progress Party/Civic and the Unions to have dialogue on the way forward and present their proposals for the corporation’s survival.

“It is surprising that, notwithstanding increasing annual losses since 2009, the then government had absolutely no plan to bring the industry back to profitability. Their only plan was annual bailouts. When asked why a socio-economic assessment of the industry was not done, the Opposition spokesperson, Irfaan Ally, responded that this was not done because they had no intention of closing or divesting the industry.”

When presented as to what, therefore was the Government’s plan, apart from the annual bailouts, none was forthcoming. This was extremely irresponsible and unacceptable on the part of the then administration,” Holder said.

On February 17, 2017, the Government had a final dialogue with Members of the Opposition who, once again, had no proposal for the survival of the industry, despite being given all the necessary information requested from Government. 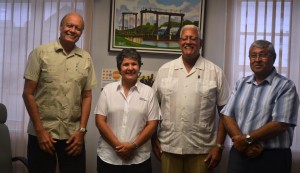