A revision of the food based dietary guidelines for Guyana (FBDGs) got underway on Tuesday, January 31st, with a stakeholder mapping workshop at the Regency Suites. The workshop which was jointly organized by the Food and Agriculture Organization of the United Nations (FAO) and the Food Policy Division of the Ministry of Public Health brought together a wide range of stakeholders from government ministries as well as the Bureau of Standards, Bureau of Statistics, PAHO/WHO, UN organisations and the Rights of the Child Commission. 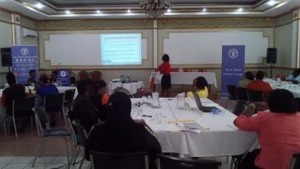 A section of the workshop

During the one day session, participants were expected to develop implementation plans for specific settings including schools, community and market/food retailers. Additionally, participants engaged in a process of stakeholder mapping to determine how to engage key actors in the food sector as well as civil society, religious groups and non-governmental organisations in the dissemination and implementation of the food based dietary guidelines for Guyana.

In welcoming participants to the workshop, Director of the Food Policy Division, Dinte Conway thanked FAO for its support and collaboration in the process of revising the FBDGs for Guyana.   She pointed to figures released by the World Health Organisation (WHO) in 2014 to underscore the pressing challenges faced by Guyana in relation to food and nutrition. She noted that, “There is a double burden of disease in Guyana where there is micronutrient deficiency in our hinterland regions and alarming rates of (non communicable diseases) NCDs on our coastland. According to the World Health Organisation (WHO) 24% of young children under five-years-old, 20.8 % of school children and 41.3% of antenatal women were Anaemic. A significant percentage of pregnant women with Anaemia were 20-years-old and younger (51.0%). And on the other hand…the probability of dying BETWEEN AGES 30 AND 70 YEARS from one of the four main NCDs is 37%.”

Conway further expressed that healthy eating is a key factor of a healthy lifestyle and stressed that the FBDGs can/ and should be used to learn more about the best food choices for a healthy eating plan.  She pointed to the Food Policy community outreaches conducted in 2016, “We saw 2024 persons and of that 528 were overweight, 480 obese and 125 obese (class) II.”

According to the workshop facilitator, Ms. Ninian Blair, “The main goal of the exercises was to ensure that there was harmonization among the sectors as they identified their complementary roles in the revision and implementation processes.” She asserted that such an approach was likely to have greater impact as it relates to ownership of the revised guidelines.

The first process of developing FBDGs for Guyana started in 2002 and the guidelines were launched in 2004. The process back then was spearheaded by the Food Policy Division – MOH with support from a multisectoral FBDG Committee/Task force. Technical support was provided by the then Caribbean Food and Nutrition Institute (CFNI).  Those first guidelines targeted the healthy population over 2 years of age and were fully endorsed by the Ministry of Health.

In 2016 the Food Policy Division requested assistance from FAO to revise the guidelines.  Since then, there have been several activities aimed at revising and disseminating the new guidelines. Among the actives were a situation analysis of the Health and Nutrition Profile of Guyana which helped to examine and diagnose the health and nutrition status of the population.   Through this process it was determined that the nutritional guidelines were set to address the prevention and reduction of the priority risks and challenges identified in the situation analysis and for the promotion of healthy diets and lifestyles.

A group of nutritionists and dieticians were then tasked with developing a technical document to define nutrition goals and to also identify the types and quantities of food that the population should eat. Based on these recommendations, food groups were outlined and key messages drafted. This was followed by a period of behaviour field testing to ascertain the populations’ willingness and ability to meet recommendations and to identify appropriate language and graphic recommendation.

The revised FBDGs were developed for the general population but directed towards the healthy segment of the population.  Conway noted that the process of developing and implementing food-based dietary guidelines can only be successful is a multi-disciplinary approach is used to engage stakeholders very early in the process.

The FBDGs for Guyana is expected to be launched later in the year. The process is being guided by International Consultants Dr. Pauline Samuda from Jamaica, and Dr. Yenory Hernandez Garbanzo from FAO. The local consultant is Dr. Sarah Gordon.