Proposed Drainage and Irrigation rates per acre of farmlands within the Mahaica/Mahaichony/Abary (MMA) areas remain lower or are just about the same as the average retail cost for one gallon of diesel at any given local gas station. 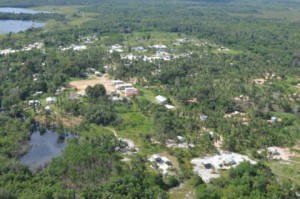 An overhead view of lands in Region Five

Research carried out on recent prices revealed that  the average retail cost for one gallon of diesel (gasoil) is $623.7. Whilst the rental for MMA lands, more specifically for Abary/Mahaicony Block Mahaicony/Abary Rice development area – $583 per acres per month, Mahaicony/Mahaica Block which includes all lands between the sea coast to Biabu/Grasshook Junction on the Mahaica River and to the Wash Clothes/E.J Junction Mahaicony River and all lands fourth, fifth , sixth  and extra depths in the area described above – $416 per acre per month and Abary/Berbice Block Profit to Rosignol Villages – $666 per acre per month.

The government of Guyana has been subsidising the actual cost for the maintenance for farmlands through the National Drainage and Irrigation Authority (NDIA). A total of $357M was allocated from the central budget to the Mahaica, Mahaichony Abary/Agriculture Development Authority (MMA/ADA) to cover costs incurred by the authorities.

The MMA has faced serious challenges in meeting the expenditure required to provide critical services since the fixed rental charges were low. Annual budgetary appropriations received for services in these blocks cannot offset the high cost for maintenance of its drainage structures.

In 1998, land rental charges for pasturage were fixed at $1,000 per acre annually which worked out to $83.3 per month.  Meanwhile, the Rice Farmers (Security of Tenure) Act Chap. 69:02 sets out the guidelines for basic rental and are expressed in bags (140 pounds) per acre which is five per cent of the quantity of paddy produced in a two crop year. In addition, the basic rental for land to pasture livestock is 20 per cent of the rent for rice lands. Therefore, the rent livestock farmers are being asked to pay will be $1400 per acre annually or $117 per month.

Despite the low rental, farmers were still not compliant with these payments as stipulated by the Mahaica Mahaichony Abary/Agriculture Development Authority (MMA/ADA) Act. This has resulted in the MMA/ADA being unable to meet the costs of the drainage and irrigation works to farmlands.