The Management Committee of the Guyana Sugar Corporation is scheduled to meet on Thursday to decide when the first crop for 2017 will commence as well as a projected sugar production target for the year. Committee member, Deodat Sukdheo told the Government Information Agency (GINA) that the latter part of February is proposed for the commencement of the first crop but this would have to be considered by the committee. 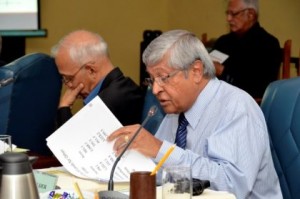 Meanwhile, the government continues to engage with relevant and key stakeholders including the Opposition on the way forward with regards to the Guyana Sugar Corporation (GuySuCo).

Last Friday, the Board of Directors and management of GuySuCo appeared before the Parliamentary Sectoral Committee on Economic Services. The meeting was intended to facilitate the sharing of information, statistics and data on the current status of the corporation.

The team headed by its Chairman, Professor Clive Thomas highlighted that proposed diversification at some estates and reorganization of the industry’s structure must offer hope for its employees.

One of the key areas of concerns is how workers will be affected by decisions taken by the government. 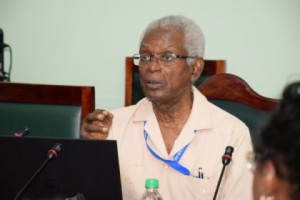 Professor Thomas explained that, “the employment cost of retaining the workers in this industry exceeds revenue. In fact the actual figure is 101 percent so we spend more on employment than receive in revenue from selling sugar and these employment costs range between 60-65 percent of the total cost across the estates and the cost range between 37 and 45 cents US per pound.”

The current workforce of the Sugar Corporation is approximately 17,000 persons with more than 70,000 family members who would be affected if there is a closure of the industry. “Our indebtedness is also dramatic; we have debt in excess of $75B. The term structure is that short term debt is at $11.7B, the long term debt is $32.9B and the pension debt  that the Corporation is carrying is just about the same as the long term debt and that is $32.8B.”

Poor labour turnout has also contributed to reduced sugar production. The CEO had reported that cane harvesters’ attendance between 2009 and 2014 ranged from 52 per cent in 2011 to 60 percent in 2016.

Sectoral Committee member and Minister of Foreign Affairs, Carl Greenidge had noted that the government is working towards ensuring the current employment structure of the sugar industry will not be affected negatively.

The cost for which sugar is traded on the world market is an average US$0. 19 per pound. However, Guyana’s production cost per pound is approximately US$0. 40  which contributes to the Corporation’s indebtedness to a number of state owned agencies including the Guyana Revenue Authority and the Guyana Lands and Surveys Commission.

The Board of Directors of the Corporation has agreed that to save the industry, radical reorganization and restructuring is necessary. Injecting money without such interventions is money wasted. Due to the industry’s current cost structure and prevailing prices, desired high levels of production is slowly becoming an elusive dream to management.

A Cabinet sub-committee was appointed in 2016 to examine the way forward for the GuySuCo. The sub committee comprises the Minister of State, Joseph Harmon,  Minister of Agriculture, Noel Holder; Minister of Finance, Winston Jordan; and Minister of Natural Resources, Raphael Trotman. The committee will take into consideration the continuum of options presented by the corporation.

Additionally, the findings of a Commission of Inquiry (CoI) into GuySuco were laid in the National Assembly in December 2015 by Minister of Agriculture, Noel Holder who explained that the government has “taken the decision to facilitate the widest possible consultations with all stakeholders in the charting of GuySuco’s future.”

The report of the CoI into the industry recommended among others, that the state owned entity should be privatized, incorporated and regulated under the Companies Act while management of the Corporation focus on basic essentials to rehabilitate the fields, factories and infrastructure of GuySuCo.