The Guyana Livestock Development Authority (GLDA) today commenced its Swine Artificial Insemination (AI) Program at farm of the Guyana Swine Producers’ Association. The aim of the program is to better improve the stock and ultimately revolutionizing the industry.

The authority has years of experience with artificial insemination and embryo transfer in cattle and small ruminants and is now gearing to achieve the same success with the swine industry.

In order to maximize the successes of the program, the Swine Producers’ Association was given a $20M grant by the Guyana Government to import 90 (Top Pig) breed pigs. Based on extensive research carried out by GLDA and the Swine Producers’ Association, this breed, in addition to having an extremely large meat production capacity, has the ability to birth an average of 14 piglets at a time, each weighing an average of three and a half pounds. This weight puts the piglets above the international standard weight, which is two and a half pounds. The pig line also has the ability to grow well over 270 pounds with a very low skin to fat ratio. These pigs mature within six months and are then ready to be slaughtered. 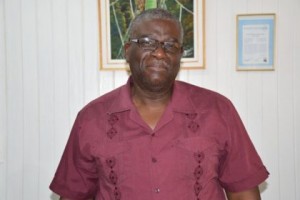 Chief Executive Officer, Guyana Livestock Development Authority (GLDA), Mr. Nigel Cumberbatch, said that the authority will be expanding the artificial program in swine across the country within the next year.

“Initially, the members of the Swine Producers’ Association will be the ones benefiting from this program but as our facilities expand and more equipment is acquired, we will be extending the service to other farmers. We will be collecting and storing semen from the pigs that were imported. We will also continue to import semen.” Mr. Cumberbatch said.

As the Swine Artificial Insemination Program develops, the Swine Producers’ Association will be handing over some of the imported pigs to other farmers to expand the production, so that they too can benefit from the program and the production capacity of the pigs.

Historically, piglets from other breeds grown in Guyana were below two pounds. This move by the Authority puts Guyana’s swine industry in a position to soon compete with and supply international markets. The Top Pig 40 breed came to Guyana in February of this year and has been doing well in terms of the climatic conditions.

Based on consultations that were conducted in the major swine producing regions, poor quality breeding animals were a major hindrance to the development of the industry. With the introduction of this new breed, the industry stands to benefit tremendously and is expected to make extreme growth within the next five to ten years. 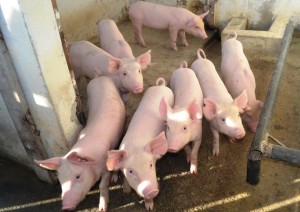 Chairman of Swine Producers’ Association, Mr. Eric Anderson stated that the challenge now remains to ensure that the animals are properly cared for.

“Training in animal husbandry and farm management is very important. GLDA has been playing a pivotal role in facilitating training for many farmers across the country. However, many farmers are not taking advantage of this. The future of the swine industry is tied in with the government giving some assistance as it relates to infrastructure and the major infrastructure is an abattoir of ASDU standards. Other members have been echoing calls to have private investors get involved in the industry but given the fact that the local market is very small, investors are hesitant. Farmers must also take into consideration that the market now calls for succulent pork and once the animal is a year and over the meat gaining capacity is low and the meat becomes tough.” Mr. Anderson said.