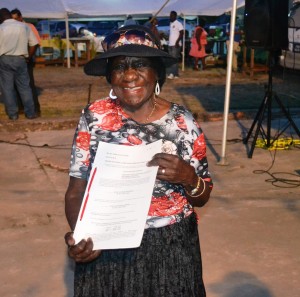 In brief remarks to the recipients and others gathered, General Manager of the Authority, Aubrey Charles highlighted the fact that lands which were previously leased to small farmers are not being cultivated by them, but by others. This he said defeats the intention of the scheme to, “make the small man a major player,” in the production and supply of agriculture produce to feed the nation.

Charles also encouraged the revitalization of Cooperatives in the Region as a means of accessing resources for expansion of productive activities. “Since 2009 food prices on the World market has been falling, yet the Caribbean has a food import bill of about $4B annually. Farmers through the cooperatives have a major role to play in the reduction of this expenditure,” he told the gathering.

Meanwhile, Chairman of the MMA, Board of Directors, Doctor Kenneth Sealey, told those present that whilst Phase One of the intended Three Phase Agricultural Development District has been an extreme success, the time has come for finances to be acquired for the development of Phases Two and Three to ensure continuity. 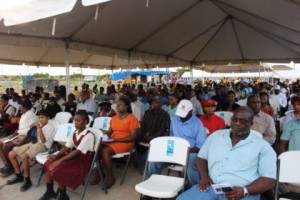 A section of the attendees at the MMA open day activity

“The success of Phase One can be used as a catalyst, as a source of garnering revenue, for income, for the building of Phase Two and Phase Three, there is nothing better for  good collateral than proof, proof of success of what you have been doing and what you plan to do. I am throwing this out because sooner than later, individuals from these various stages will be confronted with increase in rates and various issues that may not go down too pleasantly”, Sealey explained.

Alluding to the challenges faced by the MMA and farmers in the last year, Sealey said life is not always smooth, but the encouragement comes when there’s  alight at the end of the tune. This light he told farmers, is the MMA and other government agencies which often times serve as a pioneer for the development of the various aspects of agricultural production.

The feature address was delivered by Chief Executive Officer of the Guyana Livestock Development Authority (GLDA), Nigel Cumberbatch who reminded attendees that Region Five is the main agricultural producing district in Guyana because of the pioneering efforts of the MMA. “Our rice, cash crops, beef and dairy products are highly thought of by the markets in Georgetown and other regions. But, as is alluded to by the chairman of the MMA, at what cost,” Cumberbatch said. 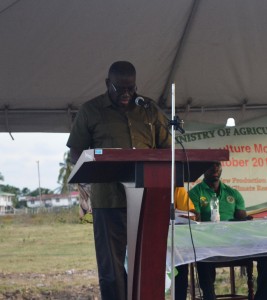 Head of the GLDA offered that the time has come for a new model to be pursued in keeping with climate change and technological developments, but pointed out that this can only be achieved at great cost.

“I am suggesting……that we have a shift maybe towards regenerating agriculture which will probably result in us looking at how we currently use our land and ask ourselves the hard questions. Some of these questions that we need to ask ourselves are how are we meeting our current needs as relates to the market that we serve and are we meeting those needs and maximizing those results? How are we managing marginal lands, how are we looking after biodiversity. What sort of fruits do we need to grow in the future? Will our own current method of farming ensure that soil, water, air will be fit for future generation to grow food, to what extent will these technologies be useful and which case it does not become a distraction from our core issues. These Mr. Moderator are some of the questions we need to ask and the answers of which I’m sure will require great sums,” the feature speaker added.

Turning his attention to the theme of Agriculture month, and the focus on food safety and security, Cumberbatch reiterated the need to diversify and move agriculture production to new areas. He told attendees that the time has come for the focus to be shifted to the production of value added commodities, which attract higher prices and will aid in the minimizing the hardships of higher rental rates for land in the scheme.

“A shift towards value added products will allow farmers breathing space to try new things. It is time that we begin to, particularly in Region 5, adding value to some products and the money that will be made from an acre of land would be increased. As the Guyana population is increasing in affluence there is going to be a great demand from consumers for transparency around the stable food production and food safety” he stated. He further added, “This signals a large market for food that can be demonstrated to be grown in healthy sustainable and ethical ways and often attract premium price. I feel there is tremendous opportunity to add value to commodity by marrying two of the biggest titles and that is agriculture and technology”. 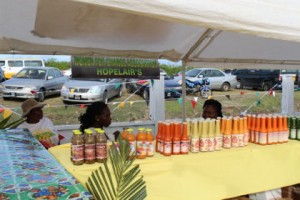