The launching comes at a time when Guyana is observing Agriculture Month and Coconut Awareness Week. In addition, from October 21 to 23, a series of activities have been organized to make the first Coconut Festival entertaining and informative. 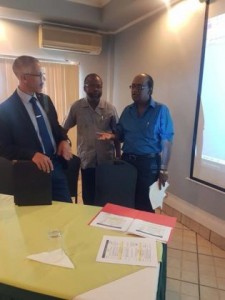 Delivering remarks at the pre-festival activity Dr. Oudho Homenauth emphasized that a recent survey revealed that there are 1,454 coconut farmers in Guyana. While, the industry comprises a large number of estates, small farmers comprise a significant proportion of the industry. This is especially so in the Pomeroon, Wakenaam and East Coast Demerara.

Dr. Homenauth posited that there are several positive features of the coconut industry including a large production base across the country; existing knowledge of coconut production and processing; dependence of households on income generated from the industry; some locations are ideal for coconut production more than other crops; pest and diseases problems are limited and manageable at this juncture; and importantly, there are renewed investment interests with respect to production and value added. 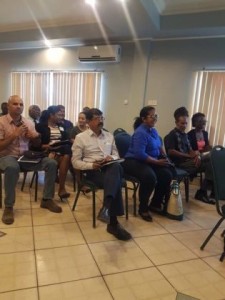 He noted that recent studies have indicated that the potential offered by the new market opportunities requires addressing a number of key challenges. Some of which, NAREI has started putting measures in place to rectify. These include establishing nurseries for coconut seedlings (planting materials); exposing staff to learning materials about coconut production so as to transfer knowledge to farmers; and conducting research in the area of pest and diseases management.

However, NAREI and by extension Government cannot do it alone. Private farmers also need to play a crucial role in accessing quality planting materials. A related activity would be the gradual rehabilitation of aged palms; even with the high financial cost attached it would be a worthwhile investment.

He added that there is a need for improving processing technology, provision of training, and technical support for value added products among small entrepreneur as a basis for entry expansion in the domestic and export markets.