Local aquaculture farm to export 22,000 pounds of Tambaqui to the US

After working with the Fisheries Department of the Ministry of Agriculture for two years, Carana Agriculture Development Project is set to export more than two thousand pounds of Tambaqui to the United States of America (USA). Carana is an aquaculture farm located at Bushy Park, West Coast Berbice. 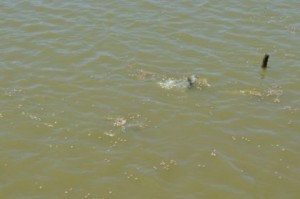 During a visit to the farm on October 18, Aquaculture Specialist, Ray DeWandel said that the farm sells about five thousand pounds of farm raised Tambaqui on the local market and is preparing to make its first shipment of 22,000 pounds of filleted Tambaqui to the United States of America at a cost of US $5 per pound.

The farm employs 10 persons from the area on a full-time basis and another 20 part-time employees to assist with processing. It is currently working with local farmers to develop a hatchery from which it will source Tambaqui fingerlings. The fish is native to Brazil.

“Any demand that can’t be made locally we go to Brazil and bring them(fingerlings) in from Roraima State,” DeWandel said.

Permanent Secretary at the Ministry of Agriculture, George Jervis congratulated the aquaculture farm’s proprietors for their success and pledged the continued support of the Ministry for the venture.

“ I am also pleased that the Fisheries Department of the Ministry of Agriculture has been working closely with you and I pledge the support of not only the Fisheries Department, but all the departments and agencies of the Ministry of Agriculture, to work with you to ensure that your project is successful. I also urge you to share your success with other farmers,” Jervis said. 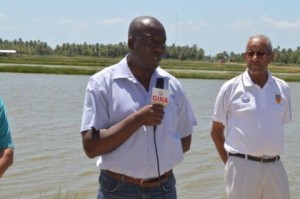 Permanent Secretary of the Ministry of Agriculture, George Jervis and the owner of the estate leased for the Aquaculture farm, Geoffrey Fraser

The farm currently operates on about twenty-five acres of land, which DeWandel sees as a pilot project to be expanded to a full-fledged operation of  200-300 acres of ponds and processing facilities.

Meanwhile, Geoffrey Fraser, a graduate of the Ontario Agricultural College, now Gueph University, and owner of the Bushy Park Estate, said he has been involved in several agricultural projects previously but readily agreed to partner with DeWandel in the aquaculture business because of its potential to be transformative.

“We had several projects at Bushy Park. We had poultry, hogs, etcetera. I was very happy to have met Ray and Patrick Henry. They are the ones who approached me…. If this project gets off the ground I have no doubt that over time, once infrastructure has been put in, it can certainly change the landscape for a lot of people in Guyana producing fish,” Fraser said.

The government, through the various arms of the Ministry of Agriculture, has been encouraging agricultural diversification as a means of mitigating the challenges posed to food production by climate change.

Aquaculture is a process by which fish and other marine species are reared in a controlled environment. It is a means of sustainably producing fish for human consumption as oceanic fish stock becomes depleted due to climate change and pollution.