Agriculture Minister, Hon. Noel Holder today met with scores of rice and cash crop farmers to address some of the ills they have been facing, with the aim of pushing production and productivity in the Region. The meeting which was held at the Indian Cultural Committee center, Highbury East Bank Berbice was centered on what support can be given on a short-term as well as long-term basis to deal with some of the problems encountered in the area.

The meeting which is part of a countrywide farmers outreaches exercise, allows for residents and farmers to voice their concerns and make recommendations as it relates to issues affecting their livelihood. It was organized by Berbice Regional Representative, Officer of the Prime Minister, Mr. Gobin Harbhajan. 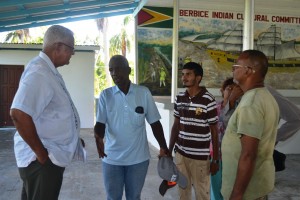 Minister Holder while engaging farmers at the meeting

Minister Holder in addressing the concerns raised by the residents pointed to significant investment has been made in the region to assist in agricultural development and to create the base for farmers to enhance production.

“The Government has been working assiduously at transforming the country’s landscape to withstand the effects of the changing weather patterns, and improving key drainage and irrigation systems continues to be a top priority in this transformation,” the Minister said.

Another area of focus, is the fact that farmers are destroying government dams to satisfy their production wants at the expense of other farmers. Such move was condemn by the Minister who made it clear that such practices will not be tolerated and those found guilty will face the consequences of their action.

“If we allow the system to work, then I’m quite certain that all of the farmers would be able to benefit from that exercise. But if we tamper with the structures, you would find farmers who have pumps benefiting, while the smaller farmers would not benefit. So I’m appealing to you, the farmers to ensure that the systems work; let us manage the systems together so that we can have a smooth flow of water reaching to each rice farmer’s plot,” the Minister said. 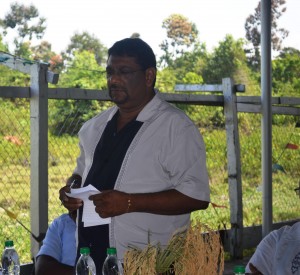 With respect to lands being readily available, Regional Chairman, David Armogan announced that a Land Use policy will be implemented shortly, which will cater to the needs of farmers through the identification of lands for the rice, cash crop and pasturage.

He added that such a policy is necessary if the issue presently being experienced is to be rectified. 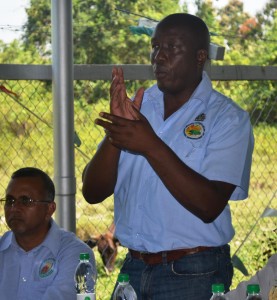 Permanent Secretary of the Ministry of Agriculture, Mr. George Jervis

In addition, Permanent Secretary Ministry of Agriculture, Mr. George Jervis speaking on the drainage issue committed to addressing the drainage and irrigation needs of the region. As such, a team of engineers headed by Chief Executive Officer, National Drainage and Irrigation Authority (NDIA) will conduct meeting with residents and farmers next week, subsequent to which, working will commence in the area.

“Despite, works will commence I am appealing to all residents to ensure that you get value for money. This has been the leading complaint here thus far, and to ensure that we get value, you will be asked to not only monitor the work but also sign off on satisfactory performance and only then will contractors be paid,” Mr. Jervis said.

The Ministry of Agriculture is taking a no-nonsense approach with respect to contractors giving value for Money and as government continues to make intervention with respect to farmers around the country who have been affected especially by D&I issues, continue to work with residents to ensure works completed are done to satisfaction.