The advancement of the country’s agricultural trajectory continues to be of utmost importance to the Guyana Government and all efforts are being made to ensure that all avenues for development is pursued.

Today, members of the Private Sector Commission (PSC) headed by Chair, Agriculture Sub-Committee Mrs. Annette Arjune- Martins met with Agriculture Minister, Noel Holder, Permanent Secretary, Mr. George Jervis and Heads of Department within the Ministry of Agriculture to looks at ways in which future collaborations can be afforded to further push Agriculture in the Region. The meeting was convened in the Boardroom of the National Drainage and Irrigation Authority (NDIA). 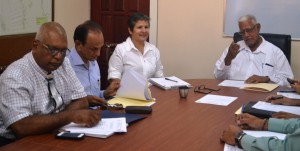 Minister Holder offering comments during the meeting with members of the PSC and Heads of Departments.

Top of the agenda is the advancement of a Dairy Plant which is expected to significantly reduce the country’s imports of milk and its by-products with its realization.

Agriculture Minister, Noel Holder during the meeting sought to highlight Government’s plans for the sector, which in the process, will be its agricultural base being shifted from the coast, since it sits below sea level to the Intermediate and Rupununi Savannahs.

“80 percent of the population is cramped on the coast and with the effects of climate change being that enormous, there is scope of a shift of productivity to the savannahs….this however, doesn’t mean there will be a neglect of the coast,” the Minister said.

Among the areas which were discussed focus was centered around: GuySuCo’s Strategic Plan, Release of new lands for Agricultural development, Government’s plans to attract large-scale investments, market opportunities for rice, new and improved genetic (rice) and closer collaboration between extension officers and farmers.

With respect to GuySuCo’s Strategic Plan, the future of the industry which is centered around it’s diversification thrust and works to ensure that the other estates remain viable were addressed by Chief Executive Officer, Guyana Sugar Corporation (GuySuCo), Mr. Errol Hanoman.

Mr. Hanoman noted that while the fundamental point is the state of GuySuCo, the Corporation cannot continue to operate with losses which are in excess of $10B annually. GuySuCo recently embarked on a diversification thrust using Wales as the model location.

“We (Government) are working at saving the industry. However, on the way forward, GuySuCo cannot remain in sugar alone, but will have to look at a combining sugar with diversification,” the CEO said.

A number of studies are ongoing which are expected to see the corporation return to profitability and the transition of Wales.

The CEO noted that the Aquaculture study report will be handed over to the Diversification Committee in early November.

“GuySuCo is also working to ensure all monies owed to the Corporation is collected. Presently, cane farmers owe the corporation in excess of $1.6B. These are some of the challenges we face but if we work together we can overcome them,” Mr. Hanoman said.

A number of marketing avenues were also suggested with the aim of protecting the local rice industry.