Today the Government of Guyana through the Ministry of Agriculture signed a Port of State Measures Agreement (PSMA) with the United Nation’s Food and Agriculture Organisation (FAO), which will see Guyana benefiting from immediate implementations to prevent, deter and eliminate illegal, unreported and unregulated fishing in Guyana’s waters.

The project, which is funded by the FAO, includes technical assistance and a monitoring and evaluation process upon completion. The cost of the project is US $500, 000 and is expected to be completed within the next 18 months.

Once these measures are implemented, Guyana will benefit tremendously as the measures will ensure that Guyana maintains its fish stock. Guyana will now be able to integrate and coordinate fisheries related port State measures with the broader system of port State controls. 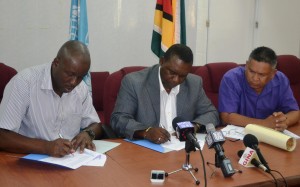 Speaking at the signing ceremony, Permanent Secretary for the Ministry of Agriculture Mr. George Jervis expressed gratitude to the FAO for such a timely intervention. “It is important to note that Guyana has a series of systemic closed fishing seasons where trawlers are prohibited from fishing to allow the fish stock to mature. This is done to allow for a sustainable fishing industry. However, the fact is that it is quite common all over the world that persons do not abide by these rules and regulations. If we do not take control of this it will get out of control. They may harvest the fish stock at a time Guyana’s industry does not consider it mature” Mr. Jervis said.

The fishing industry is one of the most important contributing sectors to Guyana’s revenue as the country exports more than 60% of its catch. This industry is responsible for the livelihood of approximately 15,000 persons and their families.

During his 2016 budget speech, Agriculture Minister Noel Holder revealed that in 2015, the marine sub-sector produced 35,835mt of seafood, raised revenue to the sum of G$25, 426, 250 and recorded exports of 21, 568MT or US$ 71 M (G$14.7Billion). With the implementation of agreement, this sub-sector is expected increase its financial input to the economy. 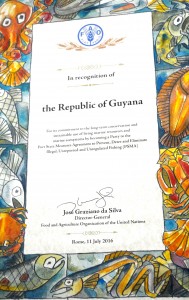 Certificate signed by the Director General of the FAO Mr. Jose Graziano da Silva recognizing Guyana’s commitment to the long term conservation and sustainable use of marine resources and ecosystem

Also speaking at the signing ceremony was the FAO Country Representative to Guyana, Mr. Reuben Robertson. He indicated that the FAO will be giving technical assistance to Guyana to assist in their fight against IUU fishing. “During a capacity building workshop which was held in April of this year, stakeholders recognized that there was a piece of legislation regarding the fishing industry (Fisheries Act No. 12 of 2002) that needed strengthening. It was during this workshop that participants were able to identify key gaps in the national legislation and regulations for the provisions of the PSMA.” Mr. Robertson said.

The Port State Measures Agreement (PSMA) was approved by the Food and Agriculture Organization (FAO) Conference at its 36th Session in Rome under Article XIV of the FAO Constitution in 2009. The aim of this agreement is to prevent IUU-caught fish from entering international markets through the implementation of harmonized measures by countries and through regional fisheries management organizations.

Illegal, unreported and unregulated (IUU) fishing hinders the growth of developing countries such as Guyana. This agreement is considered as one of the most cost-effective and useful enforcement tools for combating illegal, unreported and unregulated (IUU) fishing. It significantly reduces the need for surveillance and inspection of fishing vessels at sea in favour of inspections at port. To date, 33 states including the US, Canada and France have already signed on to PSMA.

Also delivering brief remarks, the Chief Fisheries Officer Mr. Denzil Roberts voiced similar sentiments as the Permanent Secretary in saying that the fishing industry is a very important industry to Guyana. “This is a very important industry and it has to be properly sustained so that it can be preserved for future generations. Signing this agreement is another step that will assist in this process.” Said Mr. Roberts.

With the implementation of this agreement, the institutions directly involved in the project activities such as the Ministry of Agriculture, the port authorities, inspection and enforcement authorities, customs and  legal and compliance officers will see staff benefiting from technical support in undertaking a mapping of the current country context and needs as well as formulating regulated strategies and action plans to protect and develop the industry.