A two-member World Bank team is in Guyana to monitor the progress of the East Demerara Water Conservancy’s (EDWC) adaptation project.

Team leader Armando Guzman, and Hydrology Specialist, Isabella Bovolo told the Government Information Agency (GINA) that they are here as a follow- up to phase one of the project.

Guzman, in explaining the reason for the visit stated, “Our presence here is precisely to identify how the bank can help the country to continue implementing the project. We expect to have actual works being executed later this year, we have the normal challenges we would have in implementation everywhere else.” 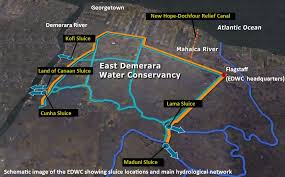 Meanwhile Bovolo said that they are satisfied that the main recommendations to fix the EDWC are being executed.

“The main recommendations are being carried out so the rehabilitation of certain sections of the dam which were deemed to be the most at risk of failure have been rehabilitated, and those are the pump stations alongside to that to increase the drainage, the East Coast drainage,” Bovolo explained.

The EDWC adaptation project is funded by the International Development Association (IDA) of the Word Bank and is being implemented in two phases. Guzman explained that studies and analyses were carried out prior to the design and acceptance of the project which is intended to prevent flooding similar to that of 2005.

“For the EDWC, we have a US $12M loan from the IDA envelope that we have for the country and for the Cunha Canal we have a Us$ 3.5M from the Guyana Redd Investment Fund (GRIF). That’s the financial contribution, but I think that the bank and many others have contributed to this because we have carried out the service and engineering analysis  required for this, so it’s not only giving the money for implementing the works, but also doing the analysis,” Guzman explained

The official added that “We invested a little more than three million to do all the base line studies and analysis to recommend the optimal solution for the flooding in the area.”

Bovolo who participated in phase one of the EDWC adaptation project explained that, “This is the implementation phase of the studies so we are looking at actually installing infrastructure whereas the previous conservancy adaptation project did a lot of modelling, a lot of studies to understand how the conservancy worked and hydraulically looking at the safety of the dam and those on the East Coast drainage systems.”

The Flood Risk Management Project, a component of the EDWC adaptation project seeks to upgrade critical sections of the conservancy’s dams and canals; significantly improve the drainage capacity in priority areas along the East Coast; and increase the institutional capacity by implementation of dam-safety measures and practices, including the installation of instruments to monitor hydrometerological data.

The project also caters for acquisition of heavy equipment to facilitate the upgrading and increased pumping capacity of the critical drainage areas, and will see more than 300,000 citizens in flood-prone regions of the East Coast Demerara benefiting tremendously from reduced flooding and climate risk.