Approximately, 12,000 black mangrove seedlings are being planted along Better Hope, East Coast Demerara foreshore. The planting exercise, which aims to regenerate 450 metres of mangrove forest, commenced last week, employing 18 persons from the community. It is expected to conclude this Friday. 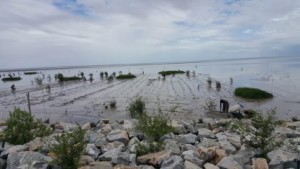 This project is being funded by NAREI and the World Wildlife Fund’s Education for Nature Grant. It is being executed by the Mangrove Reserve Producers Co-op with technical assistance from NAREI.

The completion of this activity is expected to result in the restoration of 450 meters of black mangroves; natural recruitment and extension of mangrove forest, east along the coastline; reduction in garbage dumping along the shoreline; increase in knowledge of local communities on the importance of mangroves; increase biodiversity within the restored forest; and reduction in overtopping and flooding in the community.

In preparation for the planting exercise several activities were undertaken. NAREI was tasked with surveying the foreshore to identify a suitable site for regeneration. A community clean-up exercise was also done for World Environment Day 2016. NAREI was also responsible for contracting five community nurseries to produce 2,500 seedlings each. 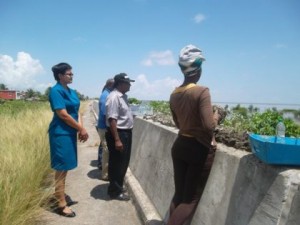 Further, consultations were conducted between NAREI and the Better Hope/ LBI Neighbourhood Democratic Council (NDC) and residents to ensure there was community buy-in, especially since fishing is an economic activity of the community. A small area on the foreshore was identified for community fishermen to dock their boats.

The Mangrove Reserve Producers Co-op and NAREI are encouraging the residents of Better Hope to support this effort to restore nature’s sea defence and protect their community from flooding by participating in monitoring the restoration and stop dumping garbage over the seawalls. The Project will also see the construction of garbage receptacles at strategic points as a means of encouraging residents not to dump over the seawall.