More single women are adding to their income by utilising the services of the Guyana Livestock Development Authority (GLDA). Farmers, especially women are using the hatchery to increase their stock, primarily to rear ducks for the commercial market.

The GLDA Hatchery Department is facilitating farmers in the use of the facility at a cost of $100 each, to hatch their eggs, allowing them to be independent and generate an income. Many farmers, primarily single parents, from all parts of the country take advantage of this service.

Robin Austin, GLDA’s Genetic Improvement Specialist during an interview with the Government Information Agency (GINA) said that, “lots of farmers are in it, most of them women and they are single parents, so we are providing an income and we are careful and cautious with the eggs, so that we increase their income.”

This process allows for more chicks to be hatched, because the eggs are properly cared for in the facility, which increases the chances of the embryo maturing into a duckling. Austin added that “we are starting with fertility and hatchability, but eventually we want efficiency, we want them to be able to have about 80-85 ducklings from every 100 eggs.” 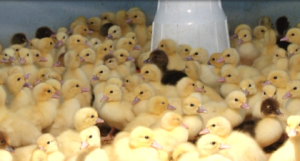 The farmers are able to have higher production, in terms of the quantity of meat they produce.  “We started at the beginning of January with 18 farmers, and now we have about 56, so there is opportunity for people doing business. There are the large producers, they will produce up to 1000 ducklings, which mean again there is opportunity for business, where they will sell to somebody who does slaughter, who does selling and you’ll see job creation from this,” the Specialist pointed out.

It is estimated that the ducklings produced at the hatchery yield over one million pounds of duck meat per year. However, the facility maybe surpassing this target by the end of 2016, with an aim of taking in over 400,000 eggs for this year.