Production in the local fisheries sector is on the increase, having grown by 2.1 percent for the first half of 2016, compared to the same period in 2015.

According to Ministry of Finance’s, midyear report on the country’s economic performance, despite the reports of positive growth, “the sector continues to be plagued by over fishing and other related issues,” which government said, efforts are being made to address. 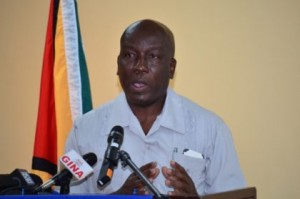 The efforts identified to mitigate the challenges faced by the sector are the installation of by-catch reduction devices on trawlers to ensure that the quantity of fish that is caught and discarded is reduced in an effort to maintain a balance of the ocean’s ecosystem; installing Port States Measurement Agreement (PSM) vessel monitoring systems and the establishment of a Seabob working group; signing on to the PSM to prevent illegal fishing, and installation of Vessel Monitoring Systems (VMS) on trawlers to allow traceability to aid in the identification of possible illegal, unreported and unregulated (IUU) fishing activities.

The Fisheries Department, Ministry of Agriculture is a member of the Seabob Industry, and has applied for Marine Stewardship Council Certification (MSC), a well-recognised eco-label that proves that a country has adopted sustainable fishing practices.

The Food and Agricultural Organisation’s (FAO) Agreement on Port State Measures to Prevent, Deter and Eliminate Illegal, Unreported and Unregulated Fishing was adopted by the FAO Conference in 2009.

The main purpose of the agreement is to prevent, deter and eliminate illegal, unreported and unregulated (IUU) fishing through the implementation of robust port State measures. The agreement envisages that parties, in their capacities as port States, will apply the agreement in an effective manner to foreign vessels when seeking entry to ports, or while they are in port.

Guyana became the 23rd country to ratify the IUU through the Port and Flag State Measures Agreement (PSMA) when the Government of Guyana agreed to the PSMA on March 3, 2016.

Through the PSMA, Guyana joined many trade partners for fish, shrimp and fisheries products. Among those are the European Union and the United States of America, as well as 18 other countries and honours previous agreements in which Guyana is involved at the regional level to ratify and implement the PSMA, such as those under the Caribbean Community Common Fisheries Policy (2014).