The Ministry of Agriculture’s catch-and-release Arapaima protocols and draft legislation have been completed for sport fishing project in the North Rupununi. The documents were recently handed over by Minister of Agriculture, Noel Holder, to Minister of Indigenous Peoples’ Affairs, Sydney Allicock at Cara Lodge.

The objective of the catch and release project is to improve the capacity and competitiveness of the Rupununi  Catch  and  Release  cluster and to  introduce and market catch-and-release sport fishing as a viable eco-tourism product in Guyana.  The project covers Karanambu, Surama and Rewa eco-lodges. The key output of the project is a strong regulatory framework for sustainable management of the Arapaima and Catch-and-Release activity based upon data and best practices research carried out under the project.

The ceremony marked the conclusion of the first phase of the Catch-and-release Arapaima Sport Fishing Project. The guidelines serve to preserve the Arapaima, while promoting eco-tourism in Region Nine. This project is being supported by the private sector investment support programme, Compete Caribbean.

Minister Allicock lauded the project for promoting tourism and offering protection to the endangered species. He pointed out that years ago, the price for the Arapaima meat had increased rapidly in Brazil, which saw residents from the local communities aggressively harvesting the fish to sell in the neighbouring country. The constant catching of the fish led to the communities pushing for a management plan, which they eventually received along with the opportunity to monitor the fish.

Minister of Telecommunications and Tourism, Cathy Hughes, during her remarks at the event said, “We know we have great natural beauty and we know we have enticing people of six dynamic races and we have vision and drive but as you know you can have all of that and if you haven’t got the dollars you cannot translate it into something real.”

Hughes added that the Ministry recognises sports fishing as an important role in the industry and acknowledges that they would not have been able to develop it without the help of Compete Caribbean and the cluster, to which she expressed gratitude.

The documents were compiled by Attorney-at-Law, Nigel Hughes, who explained that the draft legislation is aimed at implementing scientifically based protocols to encourage the proper management and the sustainable development of the Arapaima. This he says, will regulate catch and release activities in the Rupununi and help develop protocols which will reduce stress from the activity and increase existing stocks as well as prolong life. 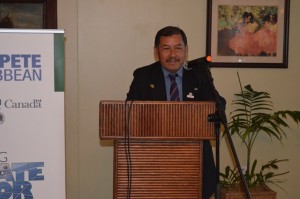 Minster of Indigenous Peoples’ Affairs, Sydney Allicock delivering his remarks at the ceremony. 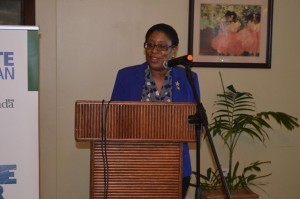 Minister of Telecommunications and Tourism Cathy Hughes addressing the gathering at the event.

Executive Director of Compete Caribbean, Sylvia Dohnert, highlighted that there are currently 98 projects across 15 countries, including nine cluster projects similar to that of the Catch-and-release Arapaima Sport Fishing North Rupununi project.

The program, is jointly funded by the Inter-American Development Bank (IDB), the United Kingdom Department for International Development (DFID) and the Government of Canada.

Among the largest freshwater fish in the world, the arapaima serves an important role in ecosystem functions of the rivers and wetlands they inhabit. They have great potential as a flagship species for Amazonian ecosystems because their protection requires conservation of freshwater and terrestrial habitats of high biodiversity.