Water level in conservancies and canals being monitored

Government is monitoring the level of the water in the conservancies and canals in the main agricultural regions, and taking necessary interventions to assist farmers.

The Ministry of Agriculture and its National Drainage and Irrigation Authority (NDIA) are closely monitoring the situation as there continues to be very little or no rainfall. 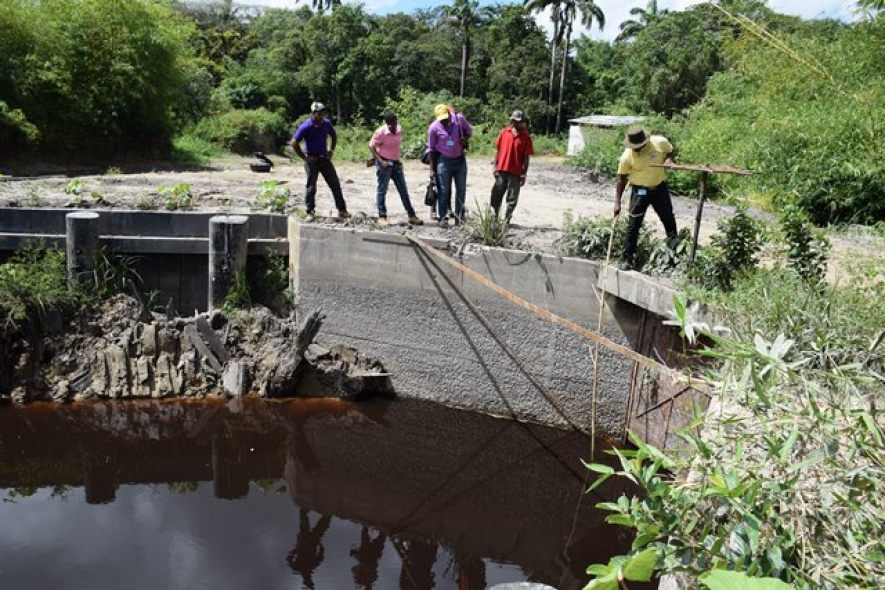 Staff of GWI and other agencies monitoring the EDWC

Low water levels have been reported in the Manikuru (Main Canal) and Tapakuma, Golden Fleece, Ituribisi, and Mainstay Water Conservancies. All four of the Dawa pumps are operable.  A recent visit by an NDIA assessment team saw several immediate interventions being put in place to aid the situation in the affected areas.

Farmers have been advised against starting new cultivation due to the lack of water. The Dawa pump station is now operating 12 more hours daily, pumping water from a tributary of the Pomeroon River into the Tapakuma Water Conservancy.

However, there are some challenges in controlling the pumping of the water into farmlands as farmers are not adhering to the irrigation schedule. As such, rangers have been placed on the ground to ensure the effective implementation of the schedule.

The officials are currently experiencing some difficulties delivering fuel to other pump stations due to the condition of the access dam. Thus far the NDIA has provided 23,000 litres of fuel for the operation of the Dawa pump station.

In Region Three, the water level is low in the Boerasirie Water Conservancy; however, the situation is under control.  There is a monitoring committee set up with the Regional Democratic Council (RDC), NDIA, Water Users Association (WUA), the Guyana Rice Development Board (GRDB), Rice Producers Association (RPA), Boerasirie Water Conservancy Commission, and the Guyana Sugar Corporation (GuySuCo) to address and monitor the situation.

The NDIA has installed a pump at Waramina (Five-Door sluice) pumping water from the Bonasika River into the conservancy. Fuel is being supplied by the NDIA to the pump at Five-Door and transported by the pontoon in the conservancy

Water is low in the conservancy so there is gravity flow for rice farmers.

In Region Four, there is insufficient water at Belfield, Cove and John, Hope Dochfour, and Cane Grove. However, the NDIA pump is pumping at Nancy in the EDWC and supplying the Guyana Water Inc. (GWI).

Meanwhile in Georgetown, all sluices are operable, however, at GWI’s shelterbelt location, Vlissengen Road, pumping has been reduced by more than 50 percent. 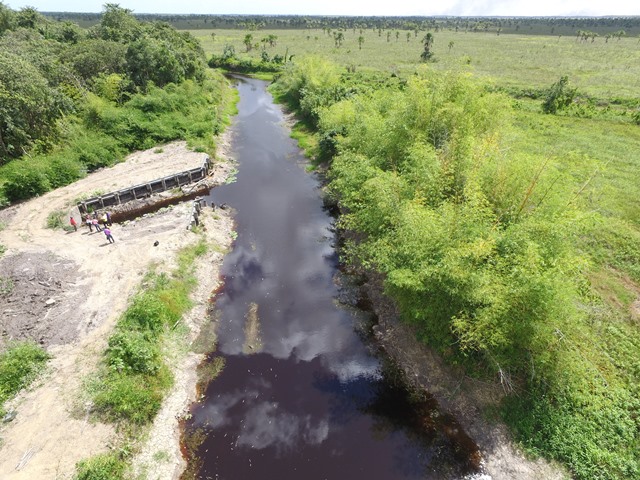 It has been reported that canals need rehabilitation and maintenance, and to facilitate this, machines are being moved from Mahaica to Dochfour then to Hope to excavate approximately 1000 rods of irrigation canals.

A pump has been moved from Whim to Nancy to supply GWI with water while the NDIA will soon relocate a drainage pump to Cane Grove to re-circulate water.

For Region Five, one of Mora Point’s irrigation pumps is currently down and the authorities are working to repair it. The drainage pump at Pine Ground is being used to provide irrigation water while another pump is operating at the main canal supplying the Blairmont area.

The NDIA repositioned Pine Ground’s pump to provide irrigation for 2000 acres of land, 500 acres of which are rice. It has supplied 1350 litres of fuel for that pump.

The pump from Sussex Street has been relocated to Kuliserabo Creek to assist with irrigation for rice and cash crop farmers in Mahaica and Mahaicony. A pump will be installed shortly as it is currently being serviced.

Excavation works are being done at Broomhall, so that farmers have better access to water. Other canals were cleaned including the Danzic/Columbia, Fairfield irrigation canals.

Excavation of the Kuliserabo Creek is being done to bring water to the Perth/Biaboo canal to assist with irrigation for rice/cash crop farmers.  Water is being pumped at Mora Point, from the Mahaicony River into farmlands.

A pump was repaired and installed at Blairmont water path to assist GuySuCo. The excavator at Pine Ground is being moved to Kuliserabo Creek to accelerate creek cleaning.

The NDIA/MMA is trying to link Pine Ground to the MARDS scheme to provide irrigation.

At Crabwood Creek in Region Six, there is insufficient water as one of the two pumps is not operable. This will be fixed shortly. Pumps have been moved from Eversham and Storage and deployed to Sandaka and Link Canal to assist the Crabwood Creek area. Both pumps broke down over the weekend. One has since been repaired, while the other will soon be operable.

In West Watooka, Region Ten inspections were done by NDIA engineers and recommendations were made to install a pump to provide water from the Demerara River into the canals, as well as an excavator to deepen canals.

A pump will be moved from Herstelling, East Bank Demerara to facilitate this process.