Residents and farmers of Region Six, today  praised the Coalition Government as two much needed drainage pump stations were commissioned, one at Gangaram and the other at Joppa, No 43 village Corentyne.

The pump station at Gangaram saw government expending $310M on it. This cost  includes construction works along with consultancy supervision for the project. The station at Joppa was completed to the tune of $277M.  Both projects were completed by contracting firm Roopan Ramotar Investments and were completed ahead of the deadlines in spite of challenges in their embryonic stages.

The commissioning of both stations attracted the attendance of Prime Minister Moses Nagamootoo, and Minister of Agriculture Noel Holder, along with key regional and ministry officials. 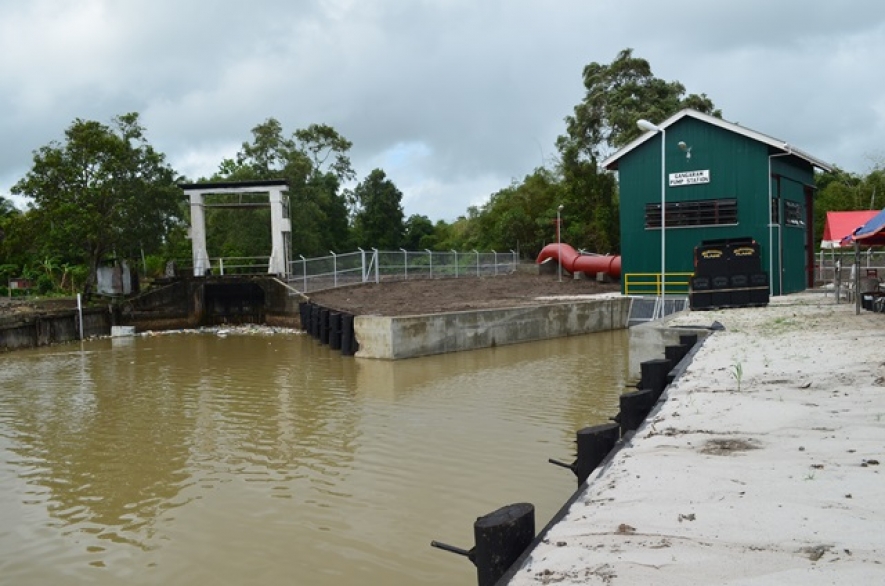 The drainage pump station that was commissioned at Gangaram, Berbice, Region Six

Both drainage pump stations have the capacity to drain 200 cubic feet of water per second which translates to 90,000 gallons of water per minute.

David Madramootoo of Reliance Settlement said it was a red letter day for the Canefield Neighbourhood Democratic Council (NDC), however residents should be mindful of the investment and properly dispose of their solid waste. “When there is high tide and you have water from the cane fields coming you do have flood…the residents only depend on the NDC to clear their drains…this pump will be of tremendous help to us, benefitting the entire economy of East Canje, Rose Hall Estate, sugar, rice, cattle farmers, cash crop farmers…it’s a boost,” Madramootoo said.

Yakusari resident, Rashid in commending the government for the much needed intervention, said the project was a very good one that will drain farm lands in that area.

Prime Minister Nagamootoo in delivering the feature address indicated that today’s commissioning is linked to a larger dream of draining and irrigating thousands of acres of land countrywide.

“When we came into government we got baptised, not once but twice…and we said no more…since then monumental work was done on the drainage and irrigation network in the city which will be replicated in other parts of the country…so that when it rains the city would not experience the flood,” the Prime Minister explained. 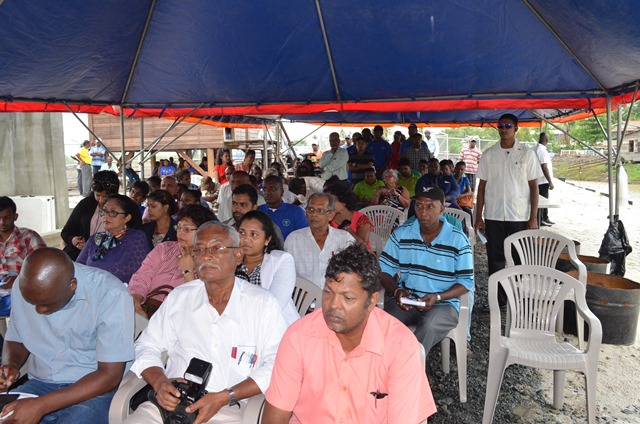 He added that the investments made by the Coalition Government explicitly indicate that they care about the people and their livelihoods, and as drainage is linked to the livelihood of most of the Guyanese people, emphasis is being placed on establishing proper drainage systems, lest Guyanese suffer the similar fate as citizens of Argentina, Brazil and Paraguay, recently did. Minister Holder indicated that agriculture in Guyana accounts for more than 33% of total employment and 20% of the Gross Domestic Product.

“There has been increasing investments in agriculture… Support to small farmers and other domestic investors, has increased production and created wealth for small holders and rural communities. ..This strategy is crucial to poverty alleviation and wealth creation,” Minister Holder indicated. 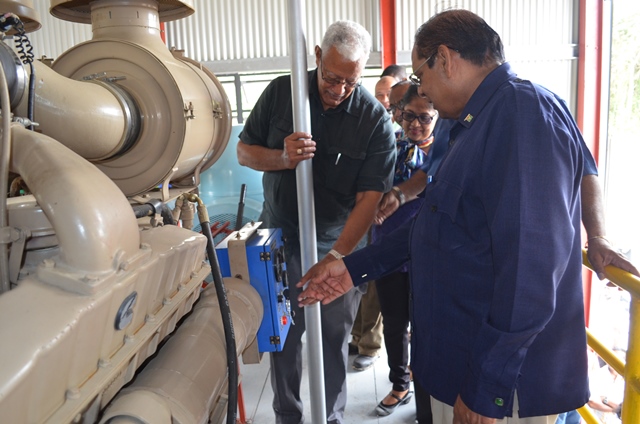 He added that water management is a critical area of focus for the Ministry of Agriculture since almost all agriculture is practiced in the low lying regions of 2, 3, 4, 5 and 6,  ” Hence the need to be able to adapt to climatic changes where our water resources and management are concerned, moreso the height of the El Nino period, we are still faced with some occurrences of heavy rainfall that can cause flash floods in many high risk areas.”

He added,  “Because of these reasons, the Ministry of Agriculture, and particularly the National Drainage and Irrigation Authority (NDIA) concentrate on best practices in the drainage and irrigation sector. In 2015,  NDIA received $1.6Billion to manage, provide, improve and extend agricultural water resource capacity. This is one of the largest shares of the Ministry’s budget in recent past and it is still inadequate,” Minister Holder explained. 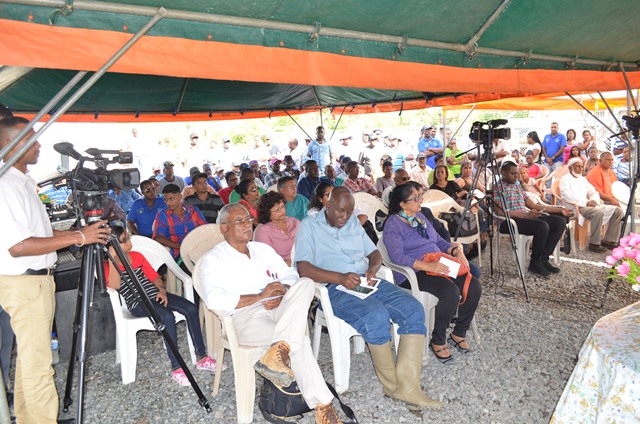 A section of those gathered for the commissioning ceremony of the drainage pump at Joppa Number 43 Corentyne, Berbice

Additionally, Region Six was allocated $ 170Million for the maintenance of D&I works, which is a 14% increase from 2014. “This government will continue to carry out all necessary works to be done in Region Six, especially in agriculture and particularly in drainage and irrigation,” Minister Holder emphasised.

David Armogan, Regional Chairman for Region Six indicated that the commissioning of the two pumps constitutes a timely intervention which will seek to boost the overall production of agriculture in the areas.

Armogan reasoned that farmers will be in a position to yield more as the pumps will ensure flooding does not affect their investment, which generally works out well for the farmers, the region and by extension the economy.

He however, urged residents to be mindful to employ proper methods of disposing their solid waste. 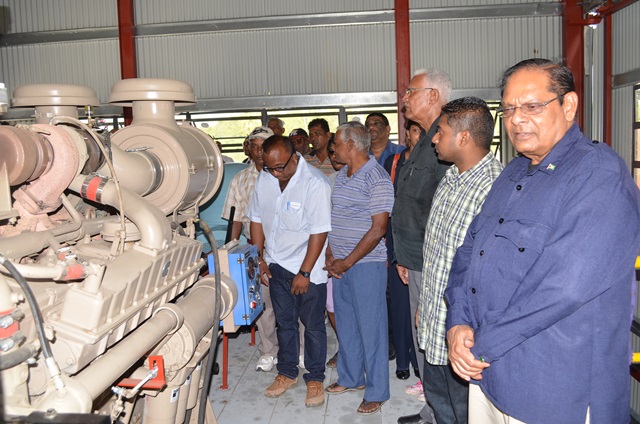 Prime Minister Moses Nagamootoo and Minister of Agriculture Noel Holder look on as the drainage pump at Joppa, Number 43 Corentyne Berbice Region Six is being switched on 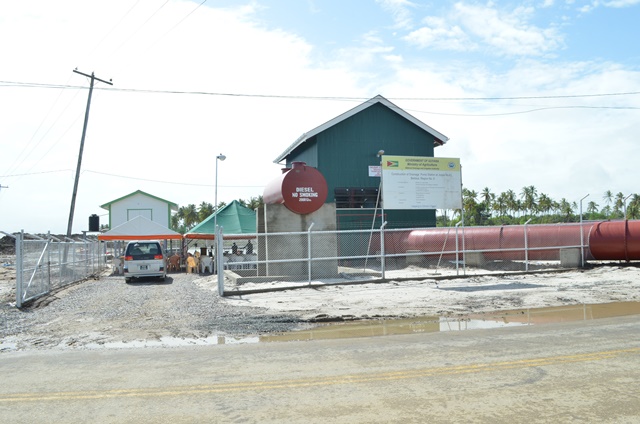